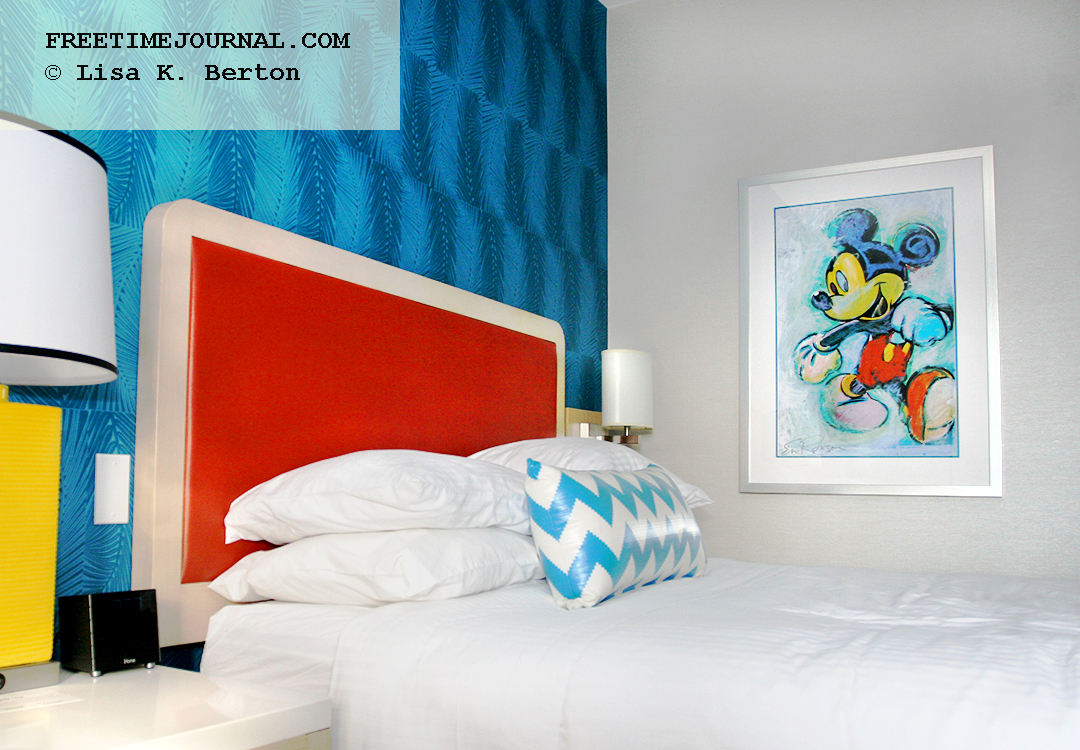 Being a grown-up can be overrated. Reclaim your youth and feel like a kid again at Howard Johnson Anaheim Hotel and Water Playground. My friends and I did.

Your imagination kicks in at the front desk. Treasure chests overflow with candy and balloon swords bounce. Cheer on the hotel staff as they create balloon turtles and mermaids. Due to age, adulthood returns eventually; use the lobby computers to check-in for your return flight.

Treat yourself to a Premium Room in Building 1 with a view of Disneyland's Matterhorn, fireworks, and monorail. Cheery yellows, oranges, and bright blues decorate the room. Wake up smiling to framed art of the happiest mouse on Earth. 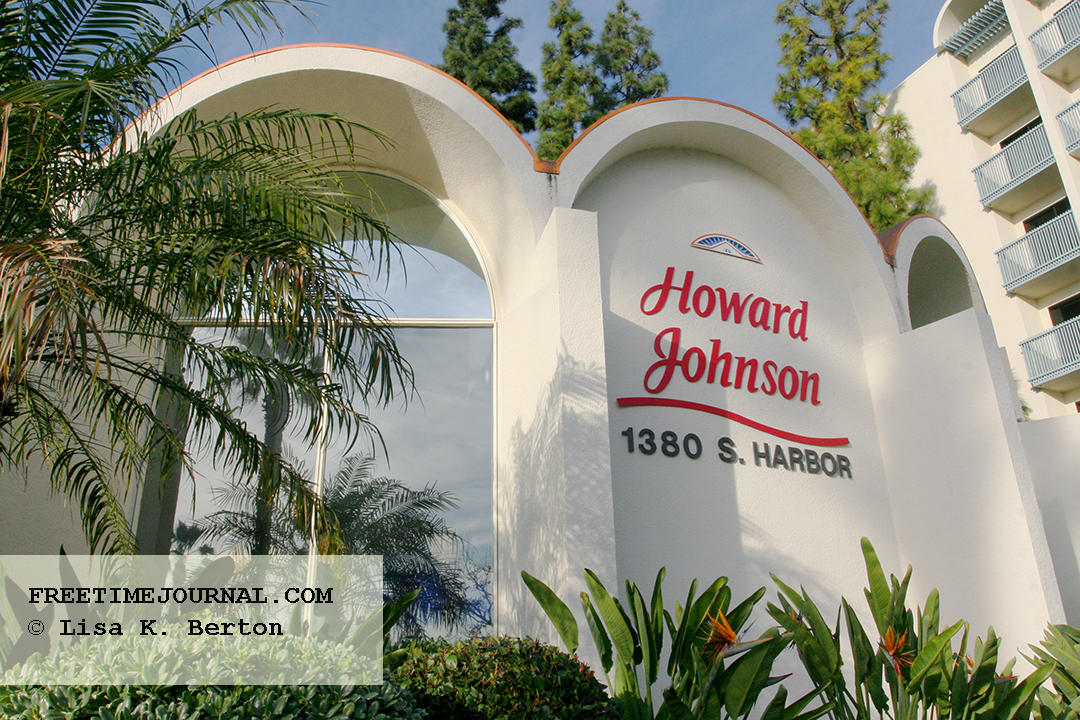 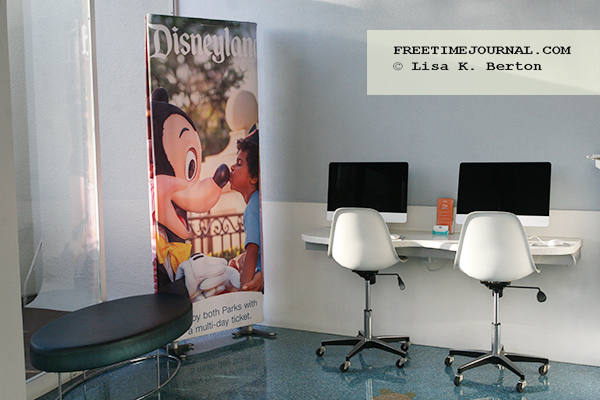 Grab a stool, sit down and write out postcards to your friends back home. Move the stools onto the balcony and enjoy spectacular fireworks. Use the in-room safe to lock up valuables rather than carry everything on you at all times. We loved the mid-century inspired bench seating and table which came in handy for sorting out snacks and eating breakfast. 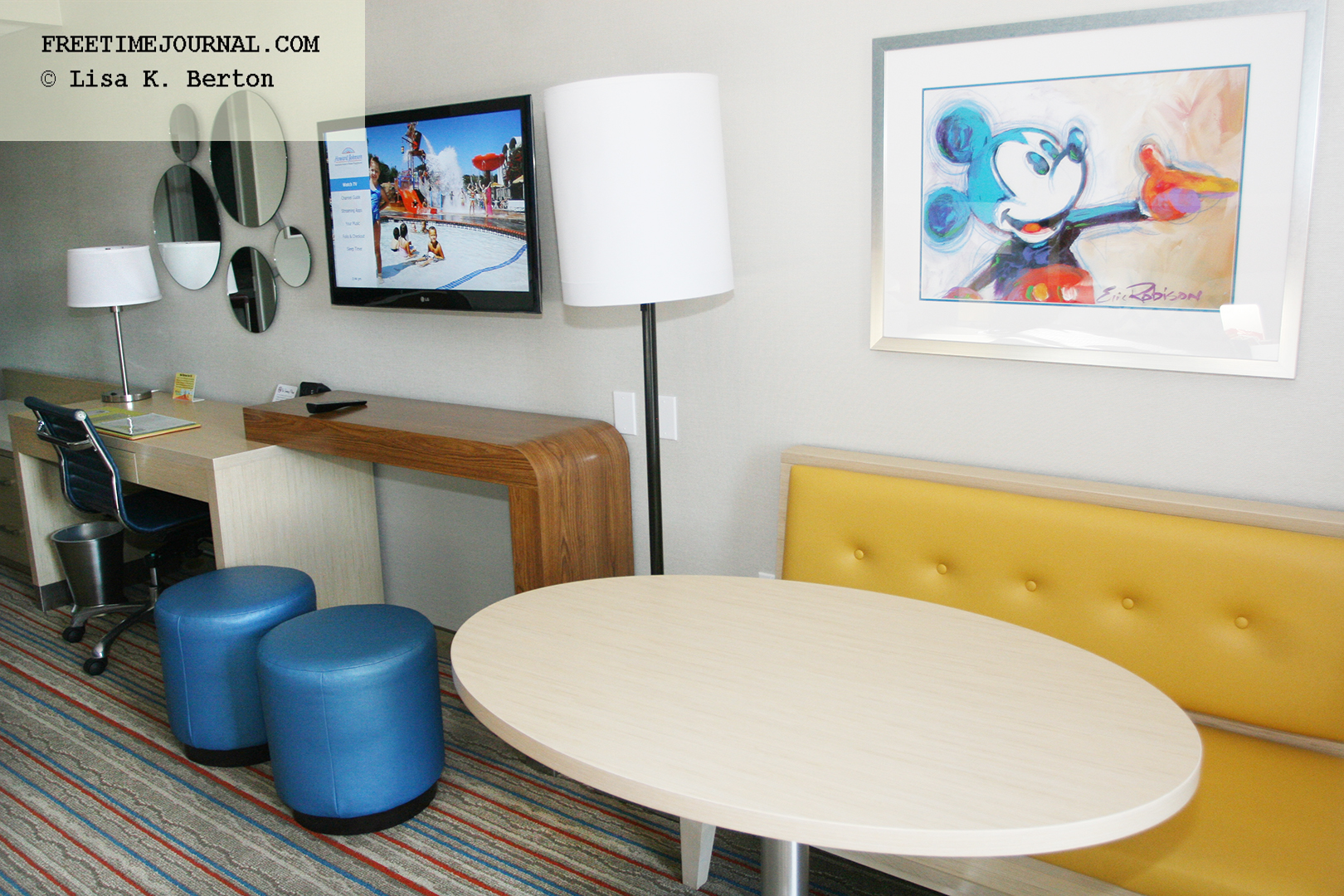 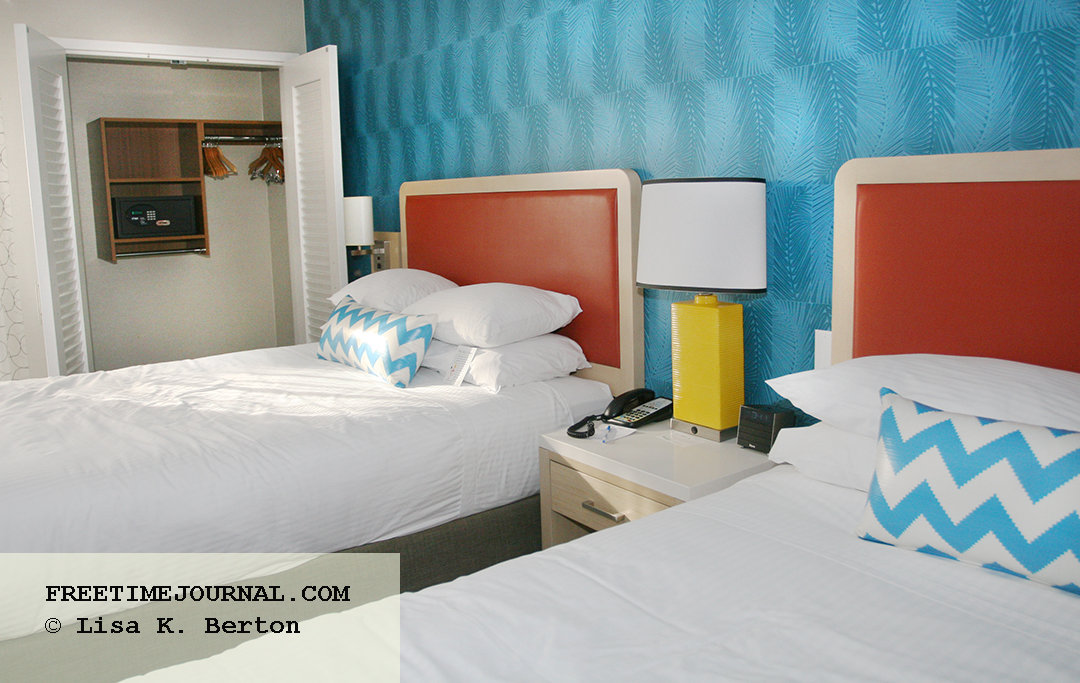 If you love taking baths, good news, Howard Johnson Anaheim Hotel and Water Playground provided you with a rubber ducky. Take it home with you no matter your cleaning preference. Lightly scented Matrix soaps, shampoo, and conditioner are supplied. The shower heated up quickly and had good water pressure.

Fill your mini-fridge with leftovers from Mimi's Cafe, located next door. Eat that turkey hummus sandwich and fries (cold or hot) for breakfast. Release your youthful inner 8-year old. 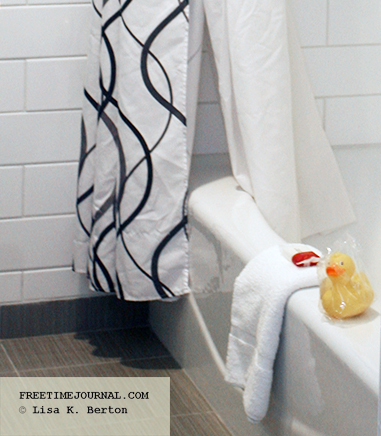 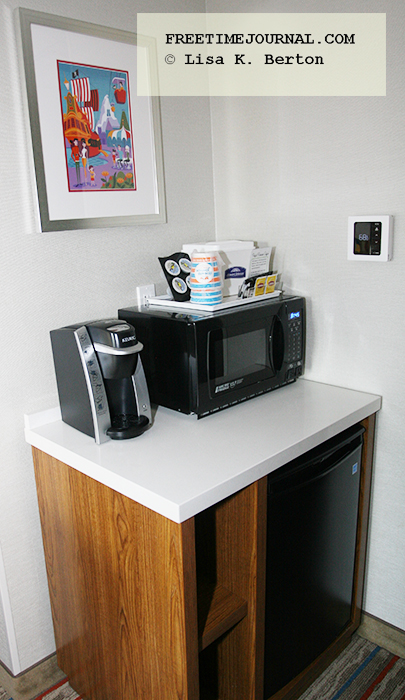 Take time to enjoy a swim in the pool or have a splashingly good time at Castaway Cove. Hotel guests of all ages have access to the piratically-themed water playground complete with slides. We heard laughter from Castaway Cove but didn't make it over due to low temperatures.

We did make our way to the arcade in Building 2 for a little air hockey rematch. Drop in a few quarters and race your friend on a motorcycle without the worries of traffic. Take on the Stay Puft Marshmallow Man in a game of Ghostbusters pinball. Stay up late like a rebellious teenager. 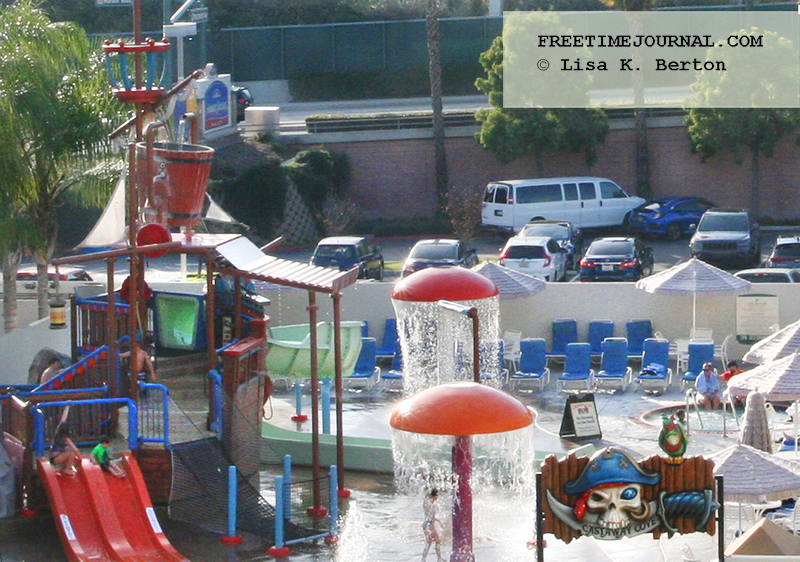 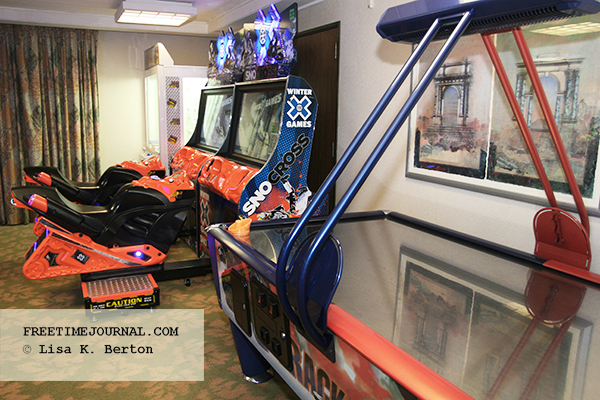 Another fun thing to do is to walk the grounds and check out the storybook stand-ins. Feel like a Wonderland resident or the proud owner of glass slippers. Cut-outs may change for holidays and seasons. Climb up a larger-than-life Adirondack chair.

Cruise interior hallways for mid-century modern seating and more fabulous work by Shag. Hung on the wall across from the hotel's Main St. Market is the original plan for Howard Johnson Anaheim Hotel. While you're out wandering, don't miss the Disneyland attraction posters. Hint: Look through the exterior windows of the circular front desk building. 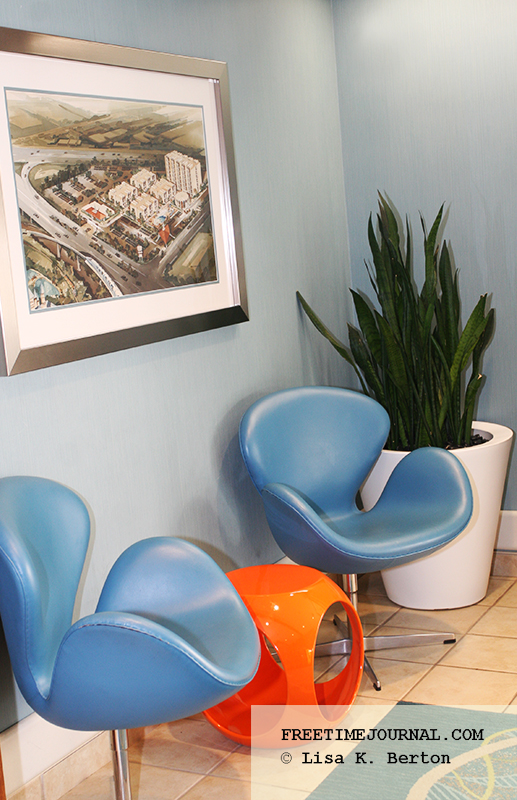 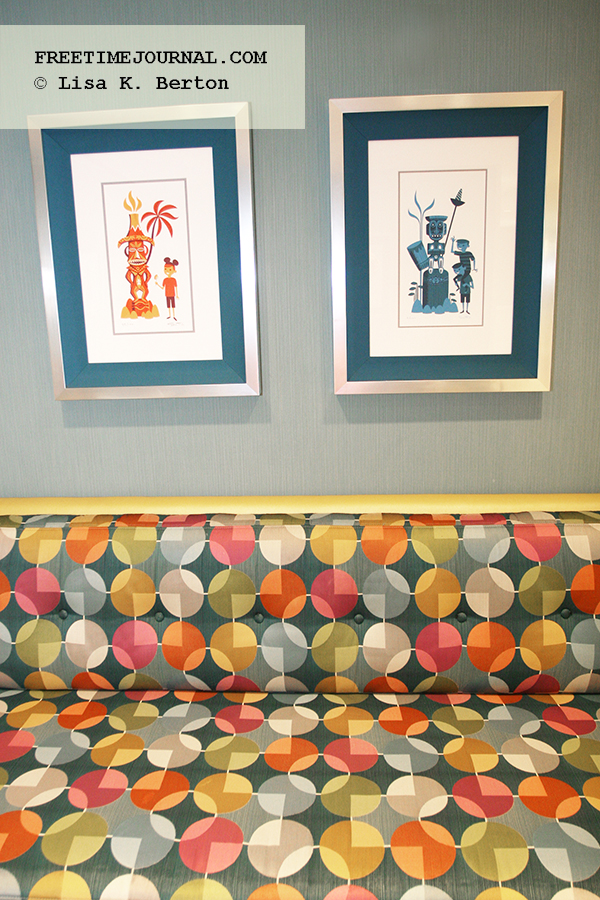 After a long day of acting goofy and consuming sugar, take pride in the fact that your comfortable bed is a short walk away. In an average of 8 minutes, you can go from the Disneyland Esplanade to Howard Johnson (HoJo) Anaheim Hotel. Climb into bed and konk out or stay up all night and watch the sunrise. You're on vacation, after all. 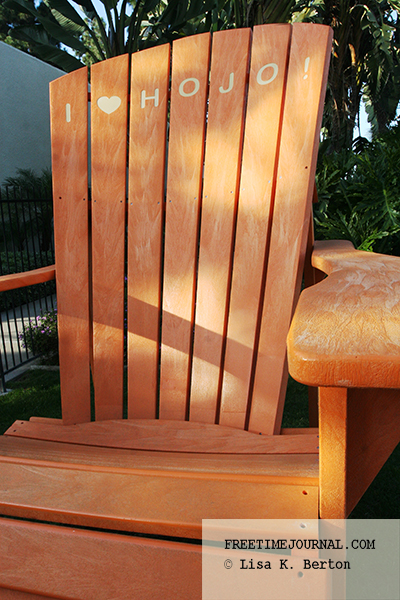 Put yourself in a pre-adventure mood (or relive the experience) with live videos from inside and of Disneyland and Disney California Adventure. Watch the Mattercam, a webcam airing 24/7 from Howard Johnson Anaheim Hotel and Water Playground. HoJo's social media guru, Thomby, visits the theme parks on Mondays at roughly 8 pm EST. Referred to as Mobile Mattercam, viewers interact with Thomby while he live streams on Facebook, directing him to attractions, shows, and his favorite snack, churros.

Earn or use Wyndham Rewards for your stay. In addition to the room described, they also offer suites, ADA accessible rooms, and neutral color Pirates of the Caribbean influenced sleeping quarters. 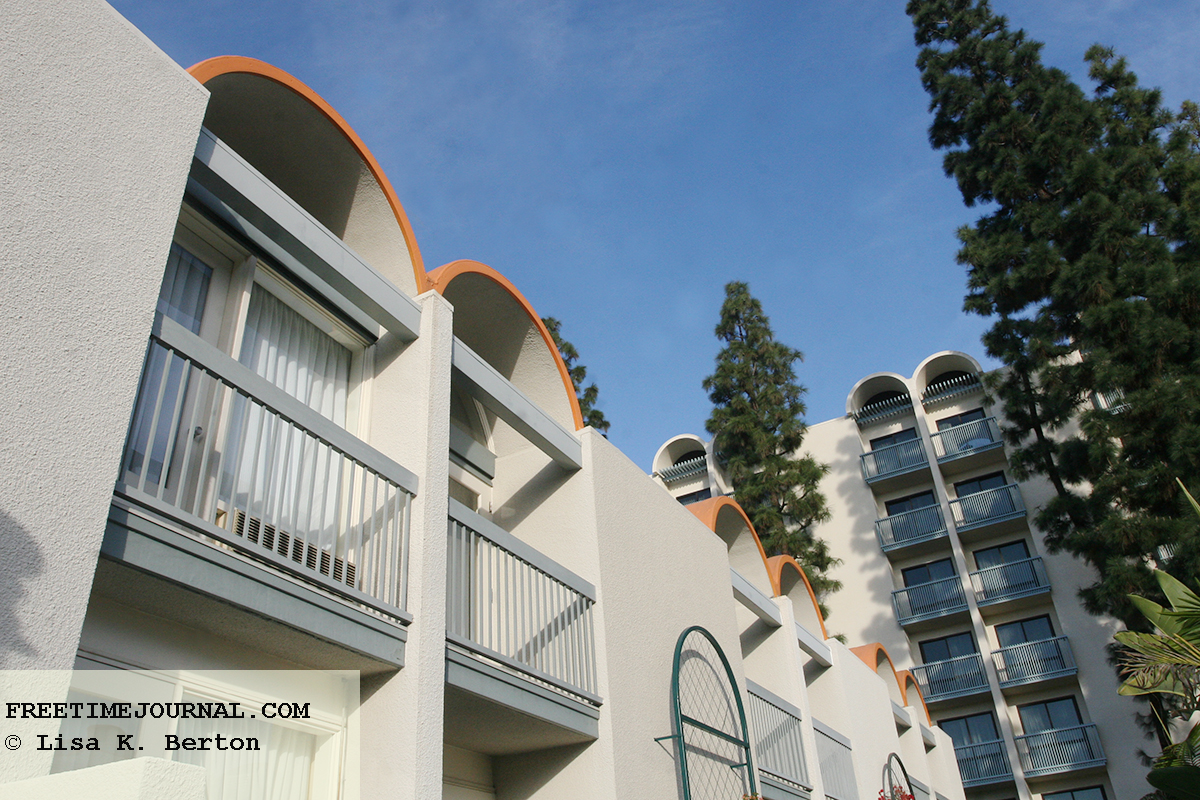